Oh where did the time of Meli Park go? At Meli we still carry the amusement park in our hearts too. What started out as an informative exhibition about bees and honey in 1935 grew into a honey paradise and a true fun park. In the 21st century, Meli Park represents many wonderful memories for many people: warm family days, fun class trips and super-fast attractions. Come, take a trip down memory lane with us!

In 1925 , 18-year-old Alberic Florizoone started selling his own honey on the weekends. Meli founder Alberic Florizoone has the love of bees in his genes. He was the fourth generation of beekeepers in the family. The young entrepreneur started his sales under the name Veurne Ambacht, a reference to the region of origin: the Westhoek around Veurne.

Ten years later, around 1935, the honey company Meli was created and Albert also opened a cafeteria with a conference room and playgrounds on a property in Adinkerke. His goal? To raise awareness about honey. At that time, the natural product was virtually unknown to the average person. The visitors could study the colony up-close in glass beehives and visit the room where honey was extracted and jars were filled. Alberic Florizoone gave extensive tours, during which he purposely allowed himself to be stung by one of his bees, and he told the visitors all about the household of a bee colony.

During the Second World War , Meli was forced to stop all commercial activity. The building was used to house German soldiers. After liberation, the bees and honey once again took their rightful place and gradually the visitors also started to return. The next big step was not taken until 1952: the transformation of a glorified sales stall into a big international bird park...

The actual Meli Park did not come into being until 1952 . The original building complex was expanded with three banquet halls. An exotic bird park was also created in the beautifully landscaped garden. Through the years that followed, Meli Park gradually became a concept for honey, family celebrations and a relaxed, educational outings.

During the 60s , the park was regularly expanded. School trips for kids were planned, but adults gravitated towards the recreation park in groups as well. The French also discovered Meli Park and often caused congested roads between Veurne and Ieper, up to the French border, on Sunday evenings.

During the 70s , several more parks were created, each with different and even bigger attractions: Bobbejaanland, Bellewaerde and Walibi. Leisure time increased and the general public enjoyed spending time there. When Euro Disney arrived in Paris, in the early 90s, the park image changed drastically. Parks became big business and visitors became real tourists.

At the end of 1999 , the Florizoone family decided to pass Meli Park on to Studio 100, so they could focus more on Meli’s honey story. The future as a child- and family-friendly park was secured with the sale to Studio 100. A strategic decision that turned out to be the right one.

The brand name Meli was chosen as a play on words of the French miel. Alberic Florizoone discovered only later that meli is also the Greek word for honey. 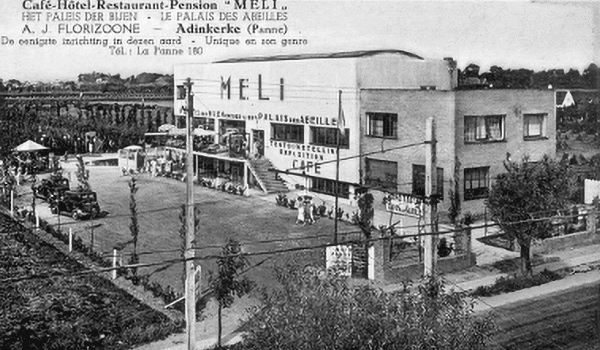 The original main building of Meli Park in 1935, inspired by the French architect Le Corbusier. There were numerous beehives on the left: the south-facing wall served as a flight hole. 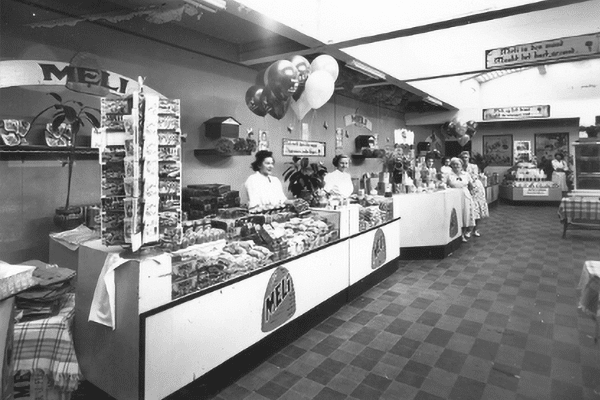 The sales hall in 1946. After the tour, visitors could buy honey here. 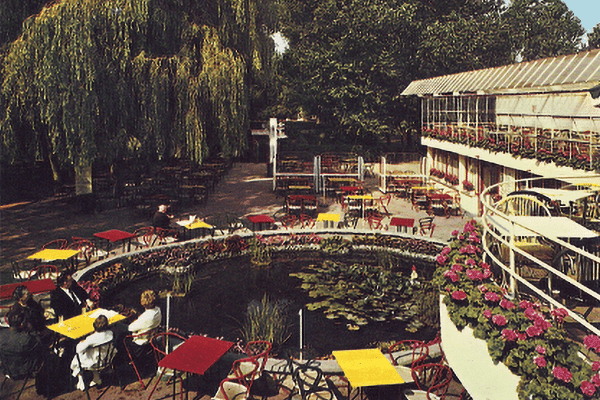 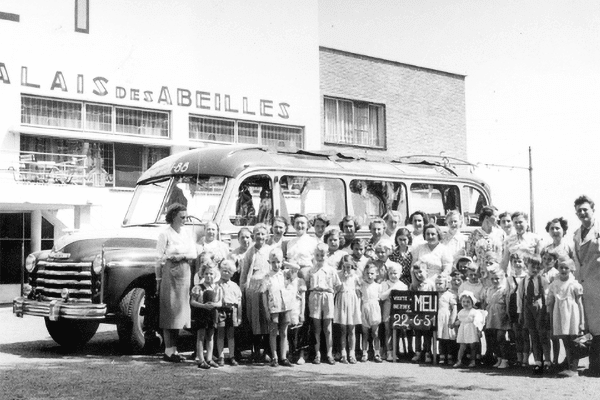 During the 50s, Meli became increasingly popular as an outing for schools and groups. 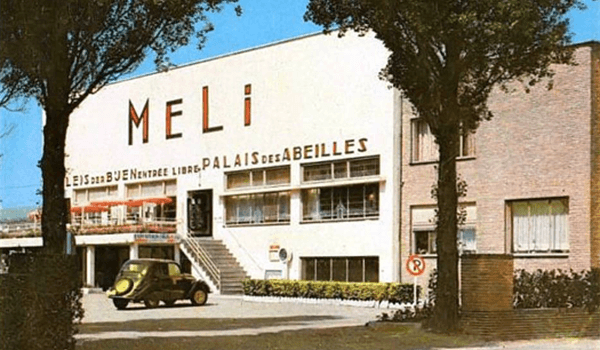 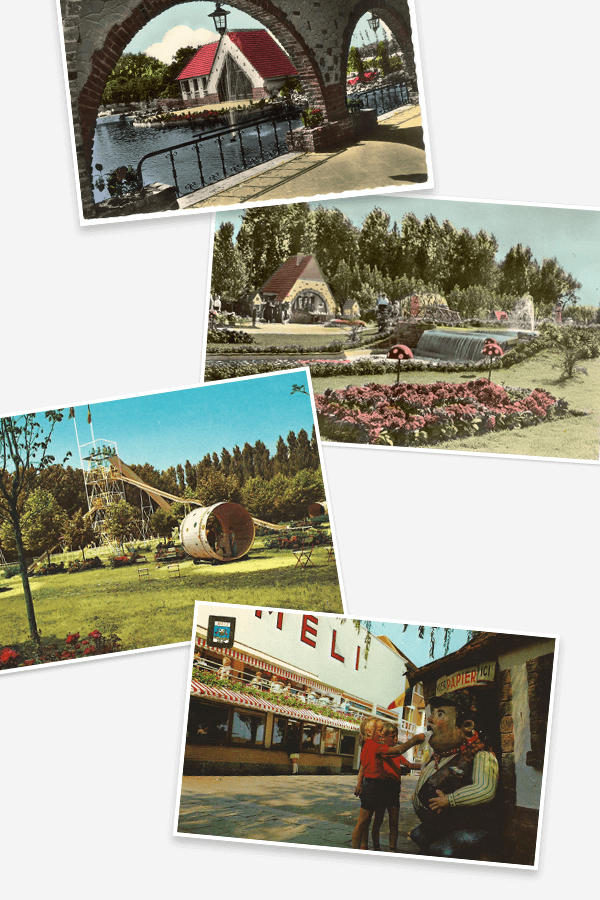 The wonderful attractions of Meli Park 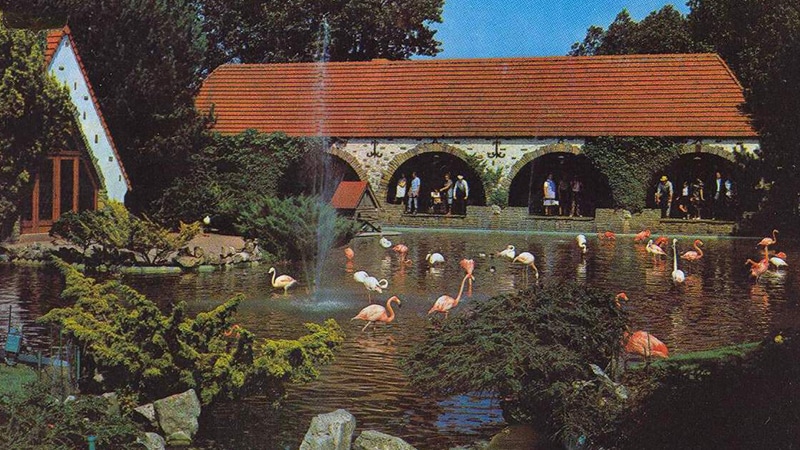 These beautiful gardens created in the French style with the flamingo pond next to the main building were the symbol for the Meli Park. Many exotic birds were introduced to Belgium here for the first time. For many children from big cities, contact with animals was a great experience.

In the fifties and sixties, one of the things Meli was famous for was its atmospheric evening lighting. Particularly, English people came from Ostend to enjoy the mysterious evening atmosphere permeating the park. 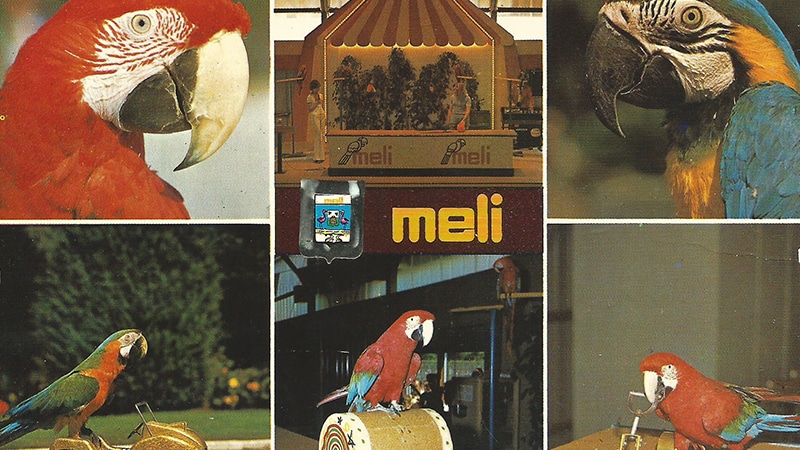 A colourful hall where various parrot shows were held every day with as many as 14 parrot performers. During the 80s, the decor was updated and the attraction was given the name Jungle Fantasy. 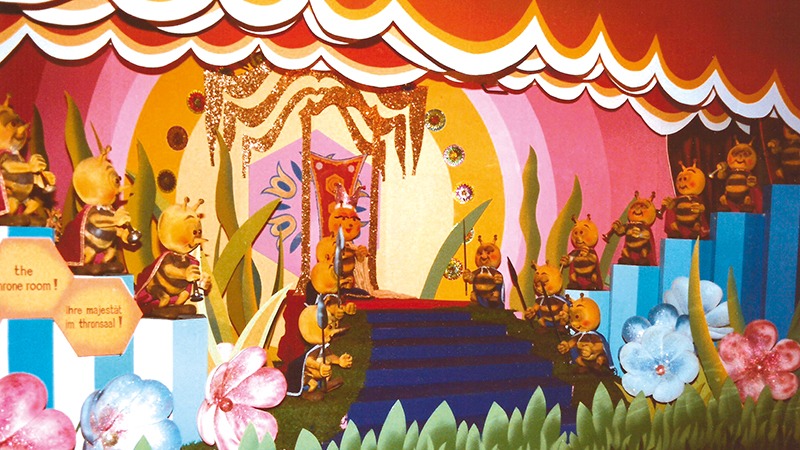 In 1979, the Wonderful Beehive, the old bee show from Expo 58, was ready for an update and a new attraction was created: Apirama, which means looking at the bees .

It was a boat trip through the whirling life of a bee colony. First you would take a trip through the hive to then dive into the summery natural surroundings along with a swarm of bees. The grand finale was a tribute to the queen bee.

This attraction was the most characteristic one of Meli Park. Millions of visitors still have sweet memories of this 8-minute boat ride.

The Meli bee was created for the opening of this attraction and had a presence from then on. 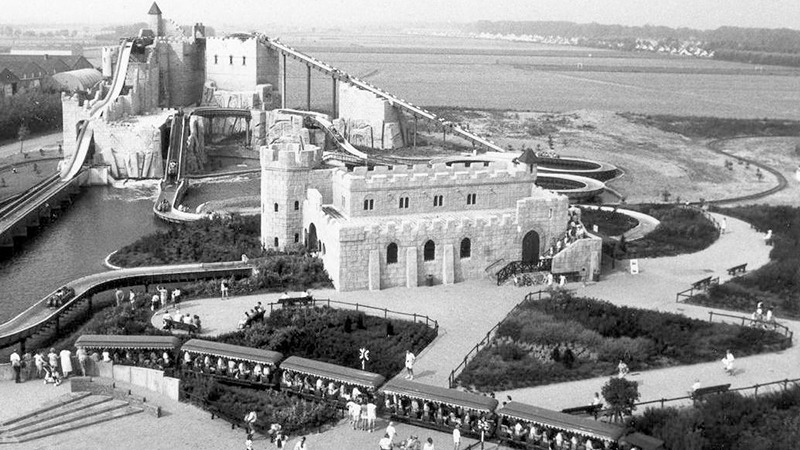 In 1989, Prime Minister Wilfried Martens opened this new water attraction. In the decor of a medieval fortress, the little boat would rush down from a high tower through a waterway and end up at the bottom with an enormous splash . 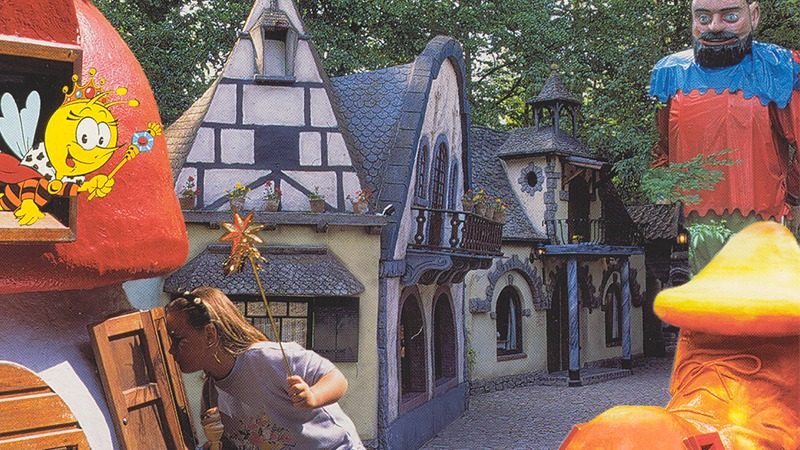 In 1953, an adventurous garden with many fairytales was constructed. Through the years, new elements were regularly added, refreshed or updated.

The town of Hamelin, where scenes from days gone by were depicted, was very charming. 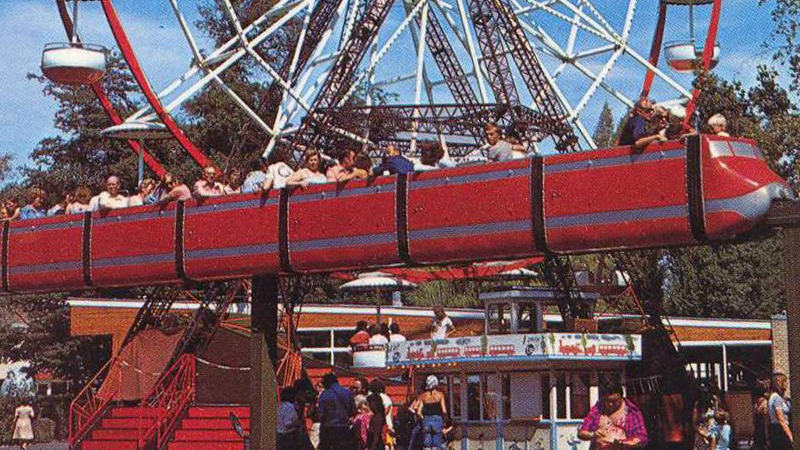 In 1972, a large part of Meli Park could be traversed with a monorail. Millions of guests got to discover Meli all over again from the air this way. 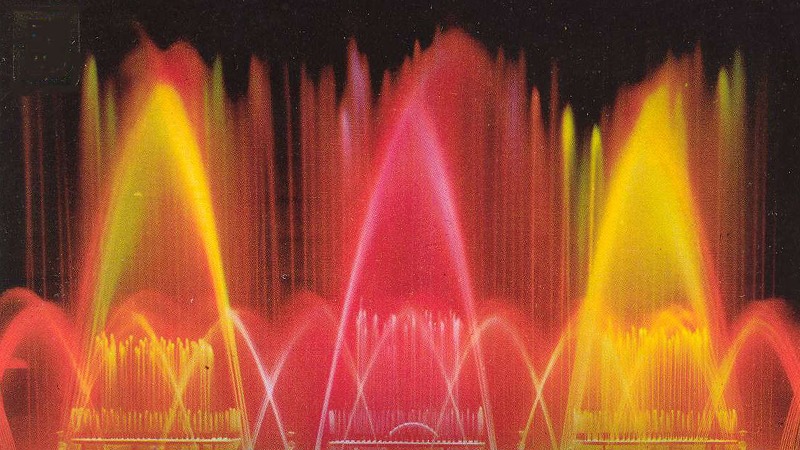 In 1956, a world attraction was brought in from Berlin. It was a harmonisation of sound, light, colour and moving water jets. Meli Park initially presented this attraction in the fairytale garden and later in the big entrance hall.

In 1996, this popular attraction was given a second life in Meli’s famous aqua laser show . Many people still have fond memories of this attraction. 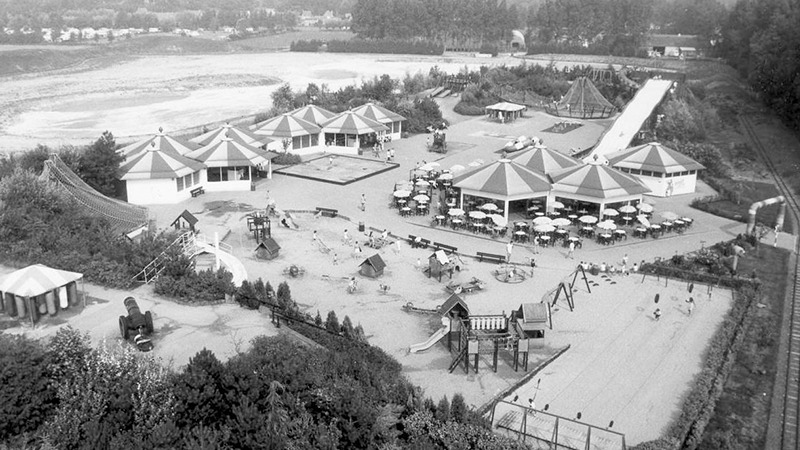 In 1984, the adventure playground Carioca was opened. There were two play zones: one for children up to age 8 and one for older kids. 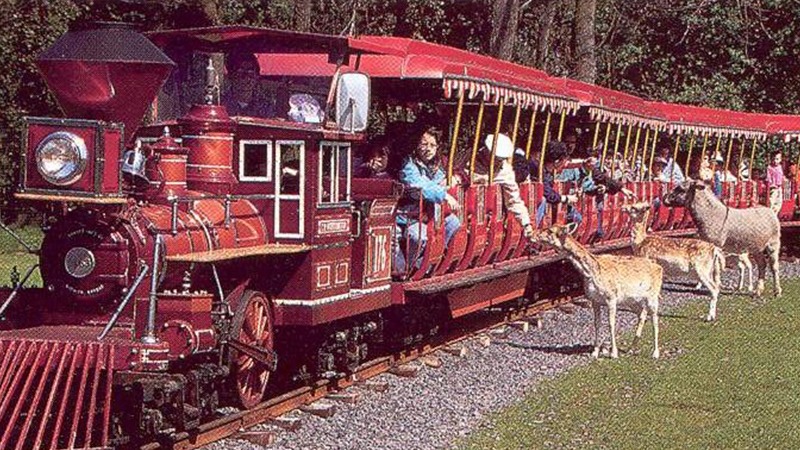 Enjoying a quiet ride through the green Meli Park with animals roaming freely. Feeding the animals was an attraction in and of itself. 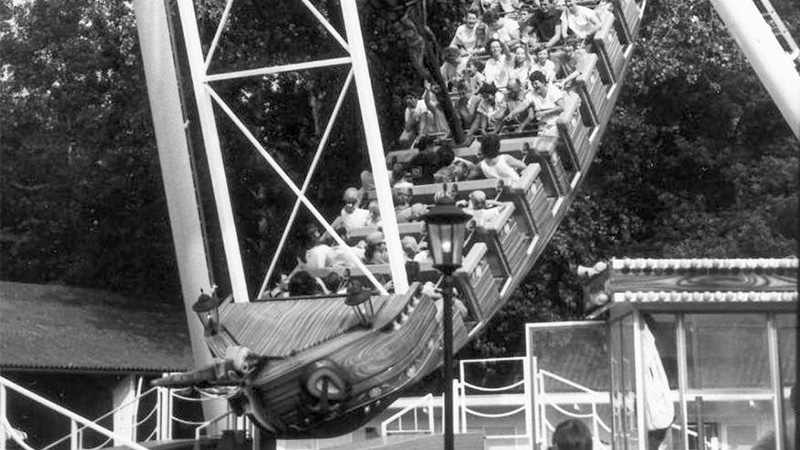 The Pirate was an attraction from 1978. It could hold 56 people for a wild swing with guaranteed butterflies in your stomach and a lot of fun.