Meli is 100% committed to protecting wild bees. Would you like to know how you can help?

About bee protection and bee mortality

Every year, the number of wild bees decreases significantly, due to epidemics or because their habitat disappears, and that is not good news, including for humans, because bees are some the most important pollinators. A declining bee population results in a decline in biodiversity. Consequently, food for humans will be in jeopardy.

What exactly is pollination?

During pollination, certain cells are transferred between plants, which fertilises the plant, which can then procreate.

The mutual dependency between flowers and bees

To understand how important bees are to humans, we have to go 25 million years back in time; just before bees came into existence. Flowers were still pollinated by the wind and by beetles at that time. As soon as bees came into existence, the flowers’ genes could be distributed much farther, because bees carry the pollen with them on their bodies and they can fly far. In addition, bees also need pollen as their power food – in addition to the nectar they turn into honey.

This created a mutual dependency, which greatly affected the evolution of both the bee and the flower world. Bees became hairier and were able to carry increasing amounts of pollen. Eventually, they became genuine flower experts. Also, flowers have evolved. Over millions of years, they changed in shape and colour to attract more bees. They also began producing more nectar, so that bees preferred them. The result? Over 25,000 species of bees and 250,00 types of flowers.

Although bees have a number of natural enemies, such as the bee-eater, the varroa mite and the crab spider, bee mortality is caused primarily by the extensive cultivation of nature. This causes less diversity in plants, and also causes bees to have to fly much farther. Because of that, they use too much energy in the summer and they often don’t survive the winter. In addition to intensive cultivation, Colony Collapse Disorder (CCD), is mentioned, which does not explain much. So far, CCD does not have a clear cause.

Fact
In Europe, the bee population has declined by 53% in the past 10 years. Europe is doing worse than the United States, where bee mortality is about 30%, although there are also sources that indicate it is closer to 40%. 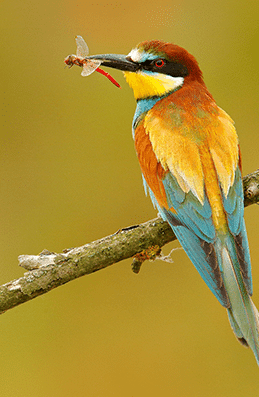 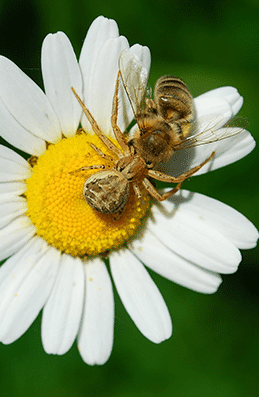 How humans are endangering the lives of bees:

A lot of very big machines are used in agriculture today; think of a combine harvester, for example. Bees and other living beings are rarely able to escape the wave when it moves towards them.

Pesticides are often dumped on plants en masse. During the last few years, origanizations have made a big effort to make pesticides less damaging for nature, but they still have destructive consequences for the bee population.

Because of modern farming techniques using artificial insemination, the genetic diversity of bee species is disappearing. The genetically manipulated bees supply more honey, but this is disastrous for the diversity among the species and, in the long term, also for evolution and bee survival rates.

Many hands make light work, including the protection of wild bees. But what exactly can you do to give wild bees a helping hand? On the internet and in libraries, you can find a lot of literature about bees, fauna and flora, of course. Here are a few tips to get you started:

Transform your garden into a bee paradise

An easy way to support bees is to plant wild flowers in your garden. Plant flowers that have a lot of nectar, like lavender, crocuses and snowdrops. Also, make sure there are flowers for most of the year; that is great for the bees. Bees are active in autumn for longer than you might think, and it becomes more difficult for them to find food at that time of year.

Little effort, big effect. It is not always easy for bees to find a good spot to build their nest. You can help them with that. Many solitary bees prefer to make their nests in old tree branches, but there are also sand bees that live in the earth. So, if you just leave some wood stumps or loose soil in your garden it will make a nice place for them to stay. Would you like to give the bees top notch accommodations? Make a bee hotel yourself or buy one at the nature store.

Do not use pesticides

If you use pesticides to destroy weeds or if you use chemical cleaners to clean your driveway, you unknowingly kill a lot of bees. Bees accidentally eat the chemical substances or drown in the chemical water that seeps into the ground. This also endangers their ground nests. If you still want to use a pesticide, make sure you read the package to see how safe the product is for fauna and flora.

Meli tries to do its share to contribute to the maintenance of nature and the bees. For example, we are decreasing our climate impact by generating energy using solar panels on the roof and we have installed five gigantic bee hotels in Flemish nature centres. In addition, we also gave away five smaller bee hotels and we provide flower seeds for consumers to encourage them to do their share on behalf of the bees.